Fantasy Sports for a Sports League

The Pro League is the top league competition for association football clubs in Belgium. The 2021/22 season is the first season the league offers an official Fantasy Pro League game, which is available in 3 languages, uses the official Stats Perform data and is aimed at both newcomers and seasoned players.

The game is free to play for all fans of Belgian football. Fans who want to elevate their playing experience can buy a Premium subscription which includes some useful extras.

The Fantasy Pro League is a partnership between Fan Arena (the Fantasy expert), the Belgian Pro League (the league) and Eleven Sports (the rights holder).

Young fans are asking for more gamification by the Pro League. Fantasy sports is the first logical step to better reach this target group digitally, because research and Fan Arena’s own experience has clearly proven fantasy really improves engagement for a sports league.

The COVID-19 pandemic has decimated the marketing budgets of the clubs. The league was looking for a solution that didn’t cost a dime, but still would work for the fantasy sports provider, Fan Arena in this case.

The Pro League also wanted to get the rights holder Eleven involved from the get-go. Eleven won the bidding war for the TV contract not only with putting money on the table, but also with their “Home of Belgian Football” vision on fan engagement. And to build as many fan profiles as possible, the Pro League SSO needed to be implemented.

Fan Arena proposed to create a classic fantasy football game, very similar to the game concept of the wildly popular Fantasy Premier League. In that type of game mode everyone has a salary cap of 100 million to pick 15 players and in between gameweeks one manages a team by subbing and transferring players, activating boosters and picking a new formation or captain.

Fans boost their fantasy experience by going Premium. This paid subscription gives fans additional features to help make their fantasy team, such as: advanced stats, spying on the opposition, creating private leagues and power subs. In Fan Arena’s philosophy a freemium model should never be pay-to-win. Everyone should have an equal opportunity to win a fantasy league. A freemium package should contain only additional features that enhance your playing experience, without giving unfair advantages.

The revenue of all Premiums goes directly to Fan Arena, which it uses to keep the game running. A freemium business model is a pricing strategy for leagues to still offer an official fantasy game, without having to free up any budget. Additional revenue can be generated via sponsorships.

Fan Arena implemented the Pro League Single Sign-On. Everyone logs in to the fantasy game with their Pro League account. There is no need to create a seperate account. The big benefit of an SSO is that it allows you to capture data and build fan profiles. All data is shared with the clubs. When someone indicates being a fan of Club Brugge, the club immediately knows that and sends you relevant updates when you’ve opted in. Without the Fantasy Pro League, there was no reason to log in when you were visiting proleague.be. 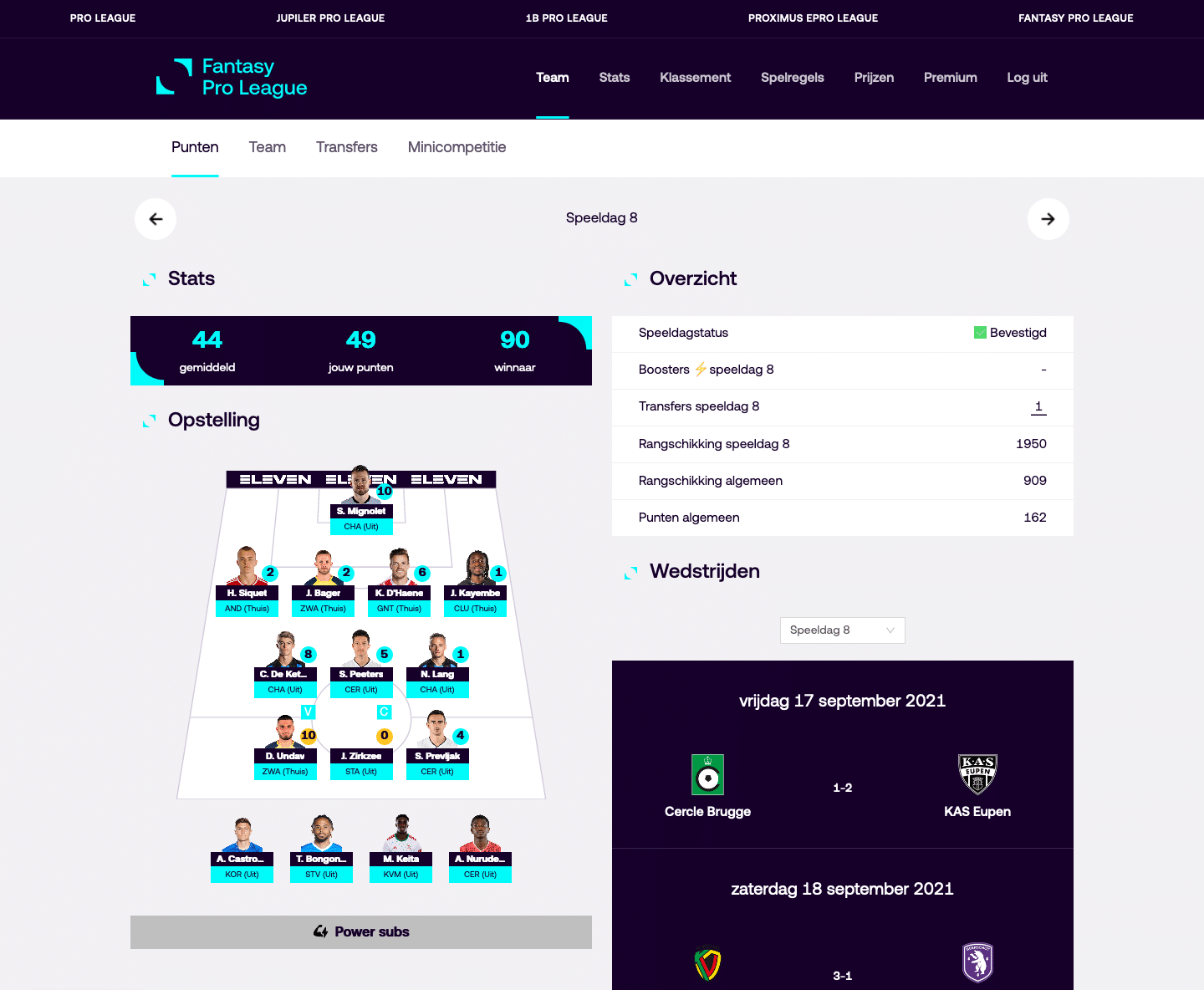 The Fantasy Pro League is a multi-year commitment of Fan Arena, the Pro League and Eleven. All parties hope the game will grow to become one of the big digital pillars of the league.

Eleven and the Pro League are putting their reach to work and are creating engaging content such as a Team of the Month, a Player of the Week and many more. Eleven has created a weekly online magazine called the “FPL Show”, in which it looks back at the previous gameweek and gives tips and tricks for the next one.

If the Fantasy Pro League reaches only a fraction of the 8 million (!) people who play Fantasy Premier League, that would be amazing!