Fan Arena and Mediahuis will relaunch the Megabike fantasy cycling franchise with a game for the 2019 Tour de France. Fan Arena has created a brand new Megabike Tour platform.

Mediahuis is a Belgian-Dutch media company behind a wide range of cross-media brands such as De Standaard, Het Nieuwsblad, Gazet van Antwerpen, Het Belang van Limburg, Metro, De Telegraaf and NRC Handelsblad. Mediahuis used to organise the Mega Spelen (Megabike and Megascore) in Flanders in the nineties for the readers of Het Nieuwsblad. Before the internet boom, people had to make their teams using pen and paper and submit the form to a local newsagent. The good old days.

Fan Arena and Mediahuis will work closely together to let Megabike make a fresh start this summer. “Fan Arena provides the platform based on our fantasy sports tech. We also share our expertise on both game mechanics and how to leverage fantasy to create new revenue streams and engage audiences”, says Octavian Susnea, founder of Fan Arena. 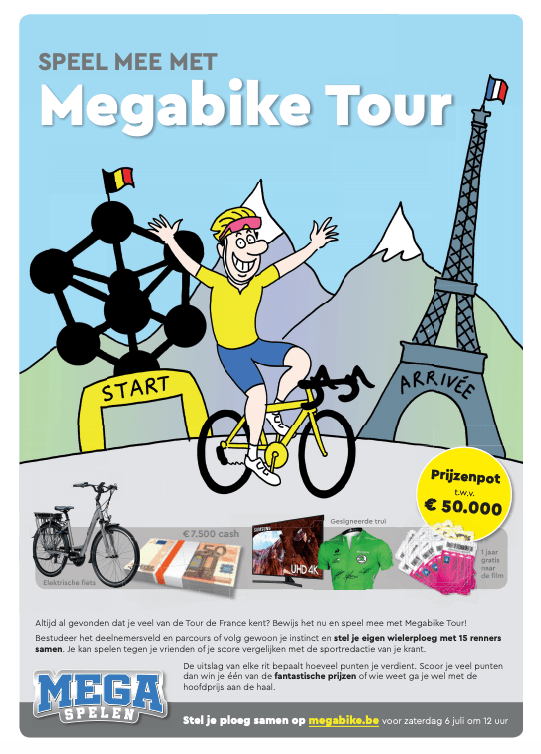 “There are two big differences from the Megabike games in the past. First of all, we are focussed on giving the Megabike players a great experience on mobile. Times and habits of sports fans have changed since the previous edition of Megabike Tour in 2013. People will now be able to check their fantasy scores on their smartphone and manage their teams up until the very last moment wherever they are. The second biggest difference will be the creation of a more coherent fan experience by combining fantasy and existing editorial content.”

Fan Arena tweaked the Megabike concept by making it a budget-based game, removing the cyclist categories (no more GC riders, outsiders and domestiques) and adding bonus points (captain and combativity). Transfers remain unavailable, but Megabike players can manage their team by putting cyclist to and from the bus. The prize pot contains more than €50.000 and the winner will take home €7.500 in cash.

Go to www.megabike.be and make a fantasy cycling dream team for the Tour de France 2019!

Contact us to discuss how a fantasy game franchise creates a new revenue stream for your media company.