NFT and Fantasy Sports. A hype that’s already over? 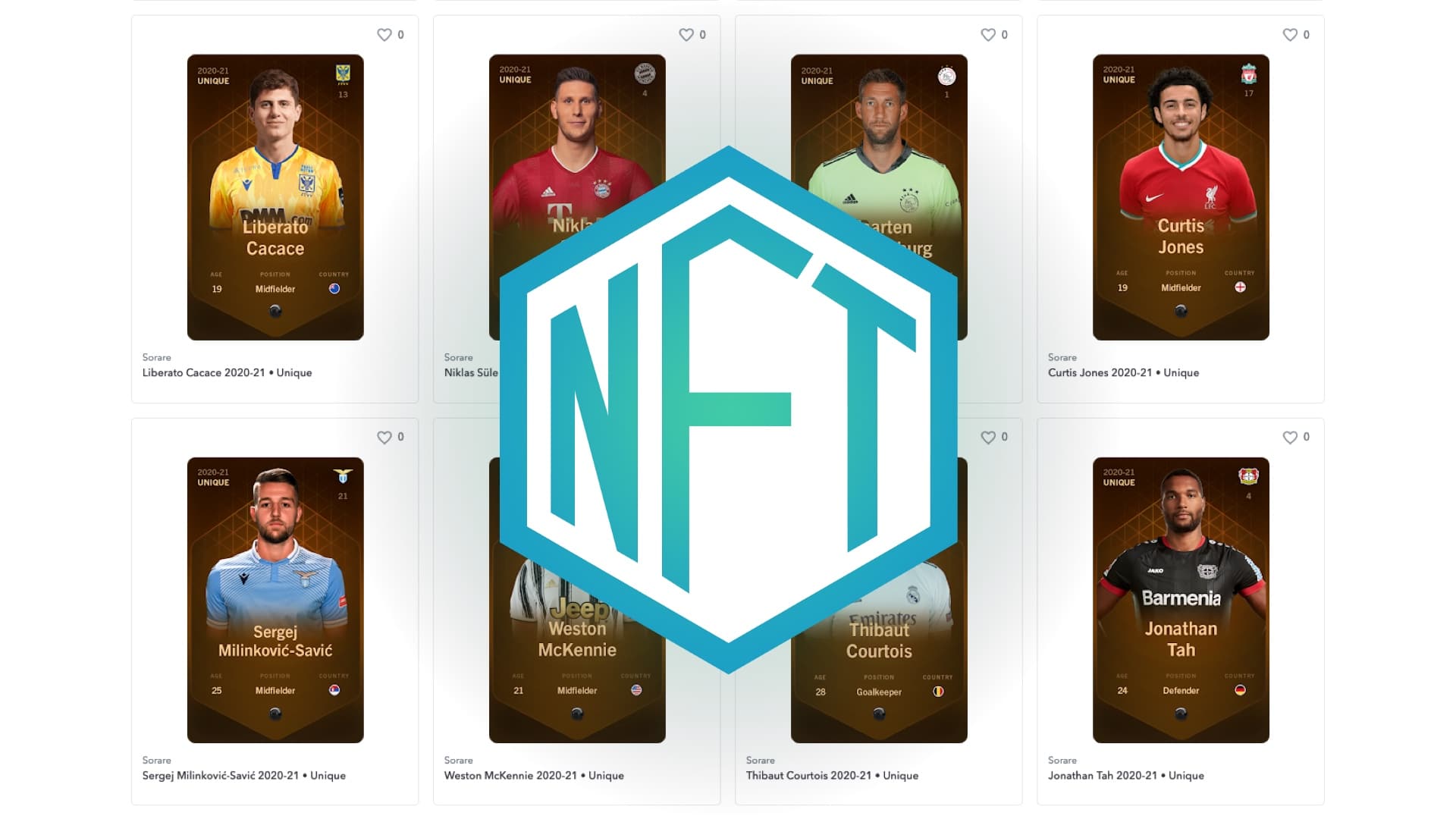 The NFT hype from earlier in 2021 seems to have died down a lot. But that doesn’t mean that non-fungible tokens have ceased to exist. In this article we are going to explain why we believe that fantasy sports projects with NFTs are something casual fans need to stay away from as far as possible.

If you don’t know what NFTs are exactly, let’s start with an analogy as coined by Martin Calladine. Some may remember that during the 80s and 90s you could buy a part of the moon and get a certificate to prove that you did. It turns out that you actually don’t own that part of the moon and it’s not officially recognized. The same goes for the all the star registries out there. They are low-key cons.

What is an NFT?

An NFT or non-fungible token is a unique digital certificate that states that you are the owner of something on the internet. An NFT is created on the (Ethereum) blockchain, and that technology guarantees the ownership of the certificate. You typically buy an NFT using some form of cryptocurrency. It’s a great way for digital artists to monetize their online creations.

But here are some side notes that make it all sound even weirder: buying an NFT doesn’t grant you copyright on the underlying work, digital assets (videos, images etc.) can be copied ad infinitum, and in most cases the NFT is just a link to where the artwork is hosted. When that link or website goes offline, where does your NFT live? It goes nowhere, it’s simply gone. The only thing left to show is an illegible string on the blockchain.

And because NFTs are using blockchain technology, it comes with some drawbacks. It’s very prone to speculative behaviour (look at the volatility of cryptocurrencies), money laundering (lack of regulation) and has an enormous impact on the planet because verifying transactions require a lot of energy. 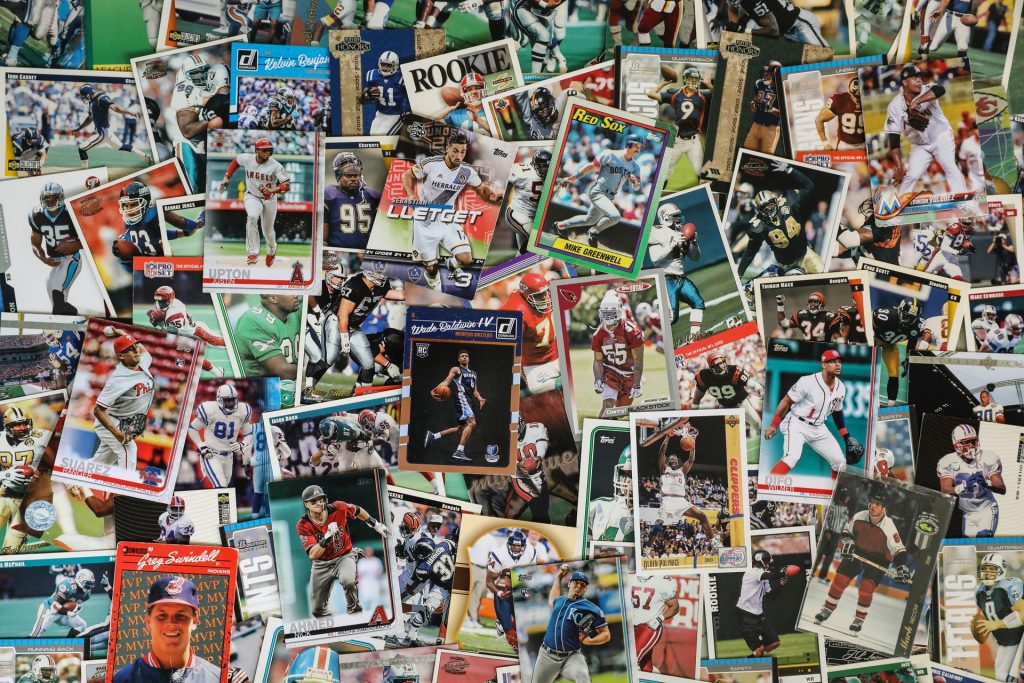 Photo by Mick Haupt on Unsplash

Why did NFTs boom?

The main reason to buy an NFT is very simple: financial speculation. You buy an NFT as an investment and you hope and pray the NFT will increase in value so you can resell it making a profit.

NFTs could boom thanks to a set of circumstances: 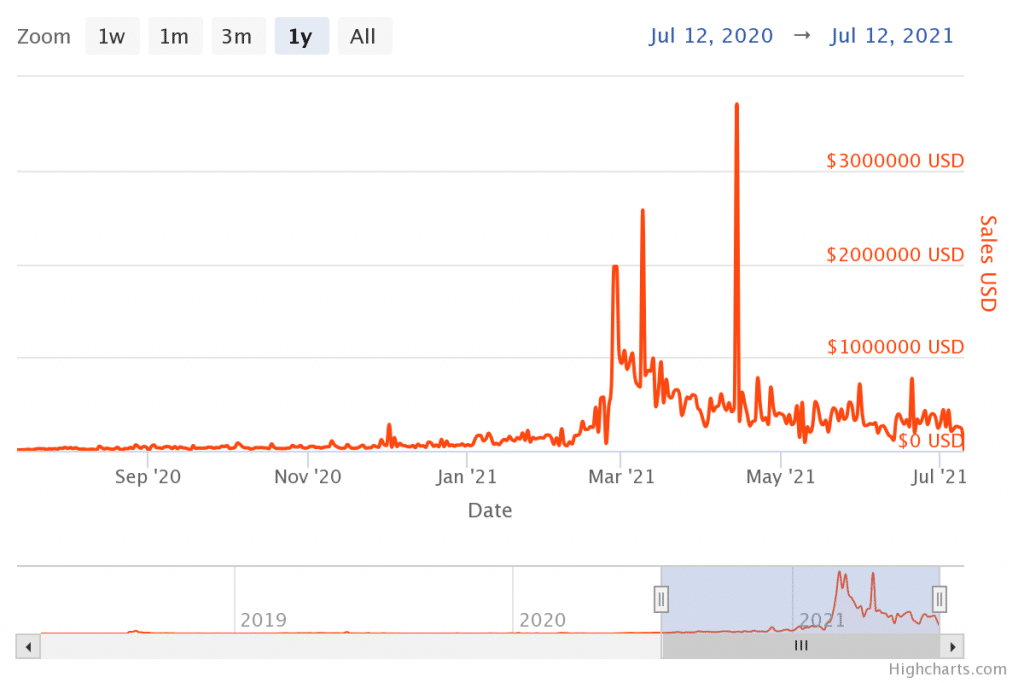 The sports world has also jumped on the bandwagon by offering digital collectibles. The prime example is NBA Top Shot where you can buy and collect videos of NBA moments. Clubs, leagues and athletes saw their income decrease drastically because of COVID-19. No more ticket and merchandise sales, and sponsors stopped or decreased their investments. Clubs and leagues went looking for new revenue streams, and offering NFTs is a very easy way to do that. As a club you can sell your portrait rights to a third party who creates the NFTs, and you can negotiate a percentage on each NFT sale.

Since we at Fan Arena are specialized in fantasy sports, we are monitoring what happens in the NFT Fantasy Sports space. The most prominent example is Sorare, a platform which is a mix of trading Panini-like cards and fantasy sports.

People buy, sell and collect Sorare cards and use these cards to enter fantasy football tournaments to win prizes. The non-fungible part of it all is that each season there are only 100 rares, 10 super rares and 1 unique card of each player.

Sorare claims to have more than 400.000 users. But thanks to the blockchain technology every transaction is put in the ledger, for everyone to see and check. In Sorare’s case we count only 20.000 active users who have actually purchased or sold a card. Their user base is only 5% what they claim, it’s a niche (football fans) of a niche (who play fantasy) of a niche (who trade Sorare cards). It’s not mainstream by any stretch of the imagination.

But the crazy high prices (paid by only a handful of people) of some cards attract attention. We mentioned before that NFT is basically just financial speculation, and in Sorare it’s the same thing. Card prizes are also very much influenced by the cryptocurrency value, in this case Ethereum.

Sorare’s marketing is on point, with having famous football players as investors and raising tens of millions in capital. That money is used to buy the portrait rights to create the official cards. Leagues and clubs earn money by selling these rights, and in each card sale they get a percentage of Sorare’s 5% transaction cost. The benefit to Sorare is that the whole platform gains respectability when well-known football leagues/clubs/players are attached to it.

The biggest issue we have is that it supposedly increases fan engagement. The example of an American waking up in the middle of the night to watch a Charleroi game is so far-fetched it’s quite unbelievable. And if it would be the case, it’s simply because the player wants to see his cards increase in value for speculation purposes. It’s not out of love for the player or the club, or even the league. An Asian gambler can also watch third division football somewhere in Europe, but that doesn’t mean he’s engaged for the right reasons.

Sorare is free to play, but that’s just a part of the story. You need to buy cards to enter a tournament, and better and rare cards to even win. That makes it pay to win, which we are diametrically opposed to. We strongly believe that everyone playing a fantasy football game should have equal opportunities to win. Your football knowledge ultimately determines your score, not the type of player card you hold.

There are broadly 3 roads you can take when thinking about a Fantasy Sports game concept.

Everybody can create a team. Your fantasy game can increase revenue by offering a Premium package, which includes tools and data to better find the right players. It elevates your experience and makes your life easier, but it doesn’t give you any unfair advantage. A player with a free team can always beat you!

You pay a fee to create a team, and you can earn prizes if you end up at the top of the rankings.
All the other game mechanics remain the same for each player, just as they would in the free to play scenario.

Your fantasy game is free to play, but people can buy things (chips, boosters, cards) that give them an unfair advantage. Example: buying a wildcard to redo your team in a specific gameweek, buying a rare player which automatically multiplies his score by 10%. Combining NFTs and fantasy in this way is not fan engagement, but fan coercion.

A more in-depth review of all Sorare game tactics can be found in this video: Sorare Review: A Financially Risky Proposition? A video by the same guy who saw the Football Index debacle coming.

We haven’t yet seen a game concept which combines fantasy sports and NFTs for the average fans, and not only for finance savvy speculators.

Regular fans should stay away from this type of fantasy sports. There are numerous other games that they can play, free of charge and with all the bells and whistles you desire as a fantasy sports fan.

For clubs and leagues it’s almost a no-brainer not to sell their portrait rights and earn a commission of each NFT sale, since they saw their revenue fall dramatically during the COVID-pandemic. But they should also be aware of potential risks associated with their fans losing lots of money and even these games and companies going under. The loss of credibility could be greater than the income it generated.

Blockchain technology and NFTs could have solid use cases, eg. in sports ticketing to combat black market sales. But we haven’t seen any viable NFT business models in fantasy sports for now.