Creating Fantasy Sports content. How VRT Sporza does it for cycling 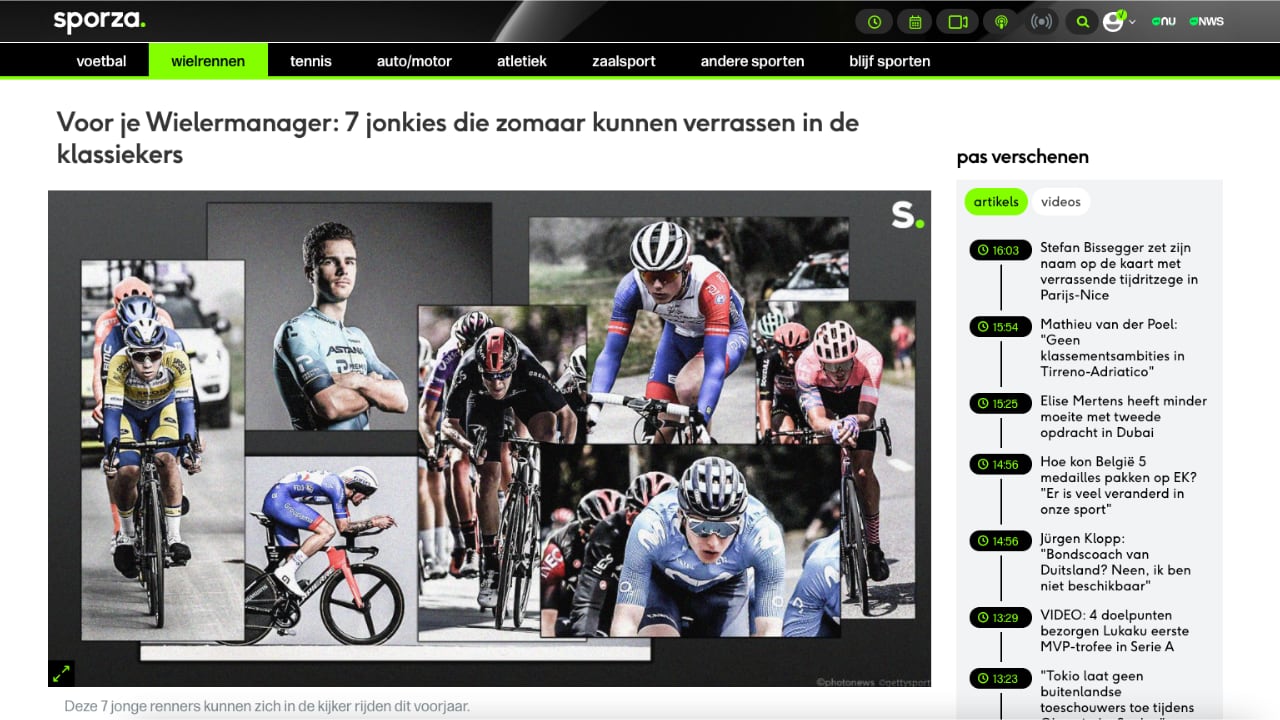 Are you looking for inspiration to create Fantasy Sports content? In this blog post we’re going to explore what you can do for Fantasy Cycling. Our client VRT Sporza uses content to promote its games and inspire everyone who plays them.

Fantasy Sports is not only about letting fans play a game of their favourite sport. It’s much more. It lets you put on a virtual fancy suit and take active decisions. Just like a sports manager of a real team would. Your decisions have an immediate impact on your team’s points and rankings. And as a manager want to make the best calls possible, based on compelling information and insights.

In addition, Fantasy Sports forces you to look at the sport from a different perspective. You suddenly become interested in cyclists finishing outside the top ten, or you are eyeing for differentiators from smaller teams.

Each year VRT Sporza organizes two fantasy cycling games: the Sporza Wielermanager (Spring Classics) and the Sporza Tourmanager (Tour de France). Both games are quite similar “classic fantasy” games with a salary cap. These games have been running since 2019. We’re proud to see each edition growing in popularity, partly thanks to the great content the Sporza editorial staff keeps creating.

Below are some content examples that can be easily translated into other sports.

People need to know when the game is live. And also that they can start creating their team and start inviting others to join a private league.

Sporza has asked different cycling connoisseurs to create a Fantasy team. Commentator duo Michel Wuyts and José De Cauwer, radio host Tom Vandenbulcke, tv presenter Ruben Van Gucht and previous fantasy winners all shared their team. And most importantly: they all tell why they picked each athlete. So this is basically a race or season preview in a Fantasy Sports format.

Sporza teamed up with The Lead-Out, a Wielermanager fan blog. Together they produced a 4-part podcast series on the Tourmanager. The Kopman (“Captain”) podcast turned out to be one the most successful Sporza podcasts.

The pre-race episodes featured all kinds of dilemmas on who to pick, some tips and tricks. Interviews with Belgian cyclists (Laurens De Plus, Tim Declercq, Jonas Rickaert and Yves Lampaert) offered some inside information from the peloton. It’s very interesting to hear who they would pick for their Fantasy team. The episode during the Tour focussed on what happened during the first week, what might happen and which transfer you might want to make. The series ended with a look back at the Tour and how you could have won the Tourmanager.

During the Spring Classics season or the Tour de France there is always an opportunity to give people some useful transfer advice. The best “value for money” or “most valuable players” are listed up so you can pick the best cyclists within the budget you have available.

Create crossovers between Fantasy and reality

In Sporza Wielermanager we’ve seen that professional cyclists also play the game. They challenge team mates and training partners in private leagues. Oliver Naesen (AG2R – Citroën) was asked at the start before a race who people should pick and why, and he recommended himself. Tim Declercq (Deceuninck – Quick-Step) looked back at the 2021 season’s opening weekend and said he was considering putting Tom Pidcock in his team.

Check out all the examples from The Lead-Out

The Lead-Out is an initiative of journalism students. They created a fan blog about the Sporza Wielermanager. They have a lot of examples of great blogs and instagram posts. On their blog and on Instagram.