Geoff Wilson on his fan engagement model, trends and growth 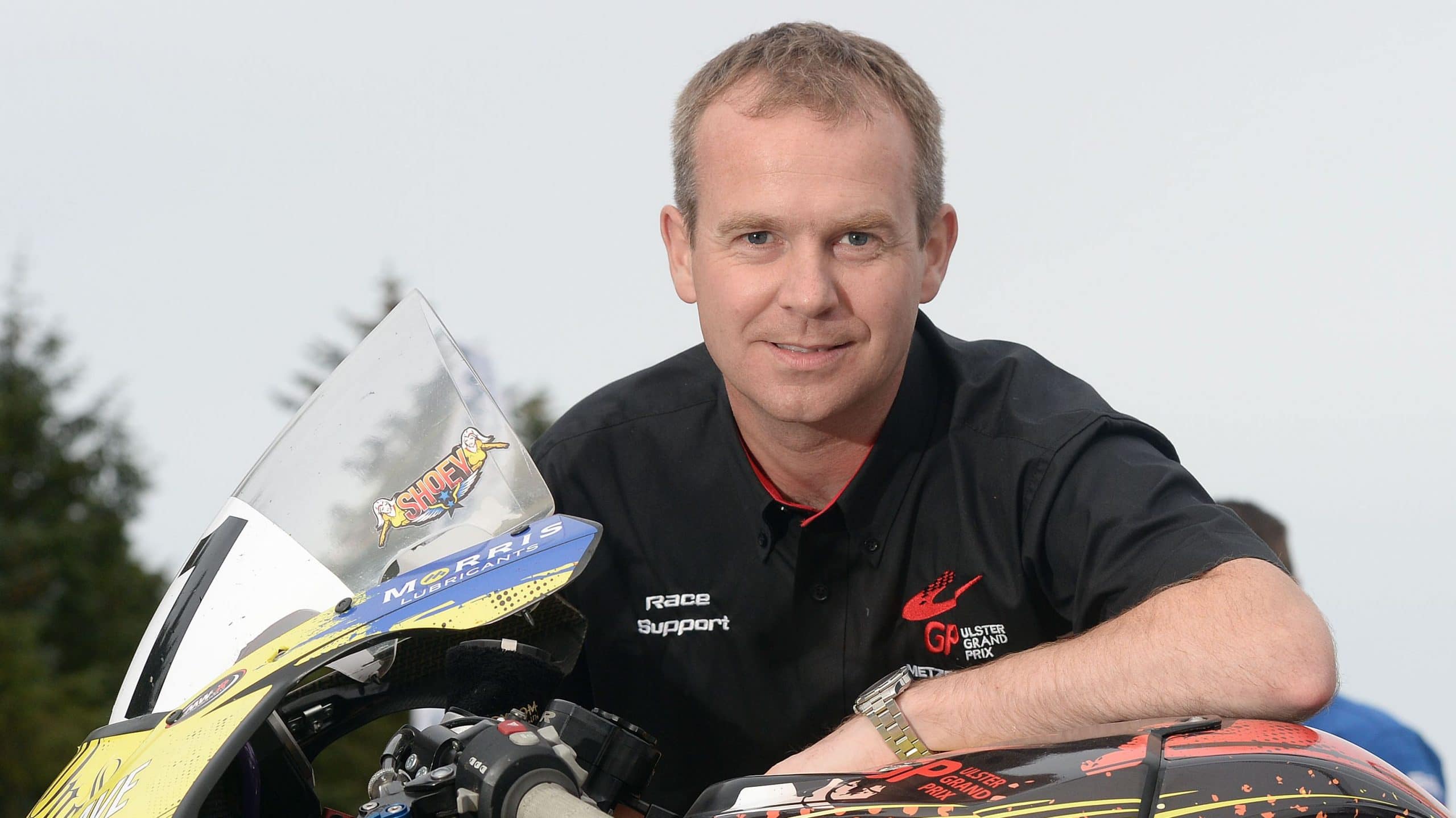 This is the second interview in our Master Series in which thought leaders from around the globe voice their insights and opinions about digital fan engagement. Previous: Kenneth Cortsen on fan engagement, fantasy and esports

Geoff Wilson is a sports strategist focusing on sports organizations and various businesses involved in sports around the world. He’s currently working in strategic, marketing and communications consultancy roles for clients like UEFA, AFC, FIFA, FIBA and the Ulster Grand Prix.

What trends do you currently see when it comes to fan engagement, specifically digital?

“I have co-created a fan engagement model (Fowler, Wilson 2016) with four quadrants to illustrate how you can engage fans inside/outside the stadium and on match day/non-match days. Traditionally, sports organisations have been focussing on engaging fans on match days in the stadium. Now we are seeking a change in terms of a move to the other quadrants as well.” 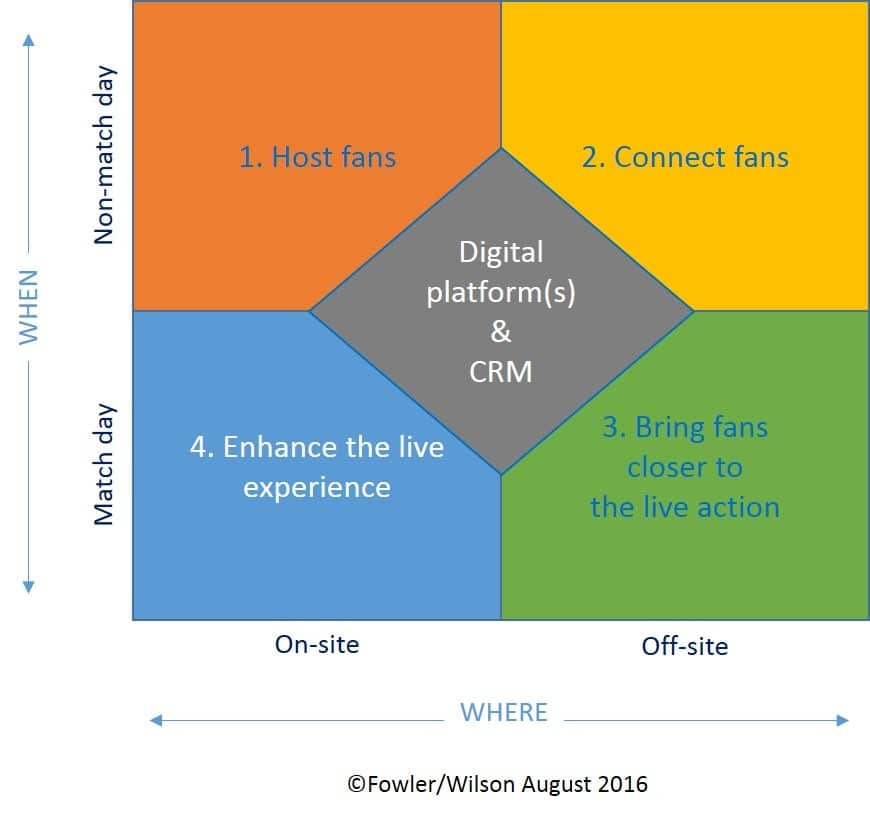 “Social live streaming and OTT platforms are gaining a lot more interest. New players are entering this space such as Mycujoo. In terms of content, we will probably see more documentary style programmes on the likes of Netflix and Amazon. This behind-the-scene content helps to not only engage their current fans but attract new viewers. At the stadium we will see more VR (virtual reality) and AR (augmented reality) being used by sports organisation. Examples include using this technology during museum tours or helping to bring murals or branding at the stadium to life. Overall, the content produced by sports organizations will be more relevant and personalized. That will result in a better experience for the fan. In terms of fan engagement we will also see an increase in the popularity of eSports tournaments as well increase use of data in fan engagement online.”

Interesting that you mentioned OTT. What is your view on expanding live fan engagement experience around OTT platforms?

“The live streaming battle will shake itself out with only a small number of the OTT platforms succeeding. An average fan will only purchase a certain number of subscriptions of 5-10£/month before they choose which ones to keep active. The platforms that fans will choose are the ones that offer the most relevant content, and it does not necessarily have to be the traditional recording of games. It might be other type of video content ranging from eSports and behind-the-scenes to video clips, documentaries to fans generated content. Partnerships will be crucial for OTT platforms: partnering with the right content providers, the right distribution partners, the right commercialization partners will be vital.”

What is the role of fantasy sports in the fan engagement landscape?

“Fantasy sports drives a fan closer to a brand and creates a lot of brand awareness. Fantasy sports players are more loyal to a league, because they are much more involved with news, videos and other content that surround the league. Fantasy sports is also interesting to sports organisation in terms of generating new revenue streams. Formula 1 has launched their fantasy game. The key for them is to promote the game and to make sure that enough people play it. In addition, fantasy providers have to make sure that the users keep playing the game for a longer period of time (retention). That can be done by tweaking game mechanics and by offering great accompanying content.”

Can smaller sports also benefit from a fantasy game?

“Yes. I think it can be beneficial for a wide range of sports such as motorbike racing, handball and volleyball.”

How can smaller sports like lacrosse and field hockey fuel online growth?

“I have quite an old-school opinion on this one. I am the Chair of Netball in Northern Ireland. Netball is very much a commonwealth sport for females. In order to grow the sport you need to engage school kids through organized tournaments and festivals. It all starts with building up awareness in schools. From school programs it further expands to clubs and then to the international setup. For sports such as handball, netball, lacrosse – it has to start at school level to help fuel the growth of the game.”

You are a consultant for FIBA, FIFA, AFC, UEFA and the Basketball Champions League. The last one is a very interesting example because the BCL grew digitally, even passing the top gun Turkish Airlines Euro League in terms of followers. What is behind the success of BCL?

“They had the foresight to create a new product (BCL, founded in 2016) and a new platform. A new product takes time to embed, but they are always progressing and looking at new digital ideas. BCL focusses on engaging all the clubs and their fans, especially during the finals.” 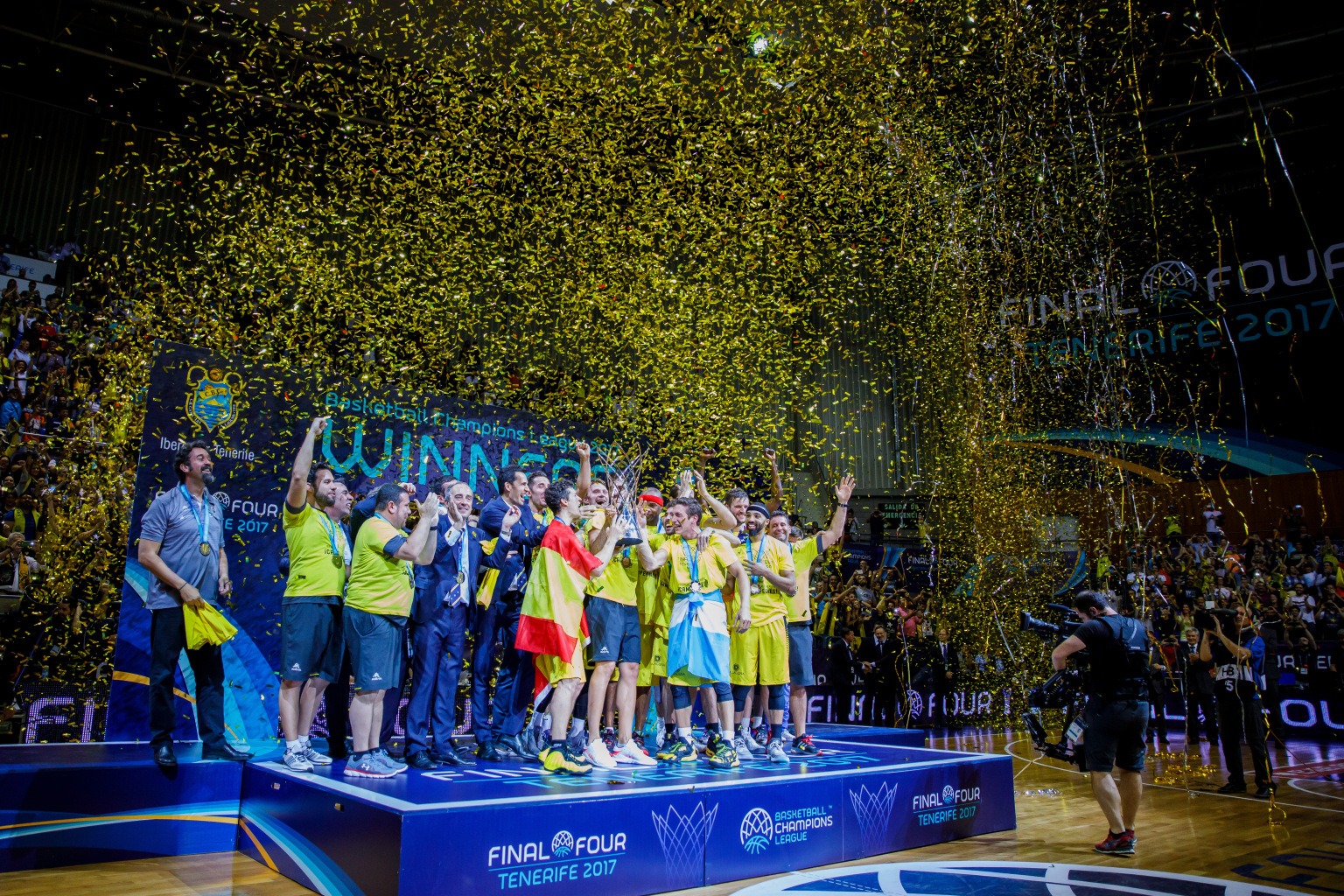 Did they look for inspiration at other flagship leagues, such as the NBA?

“Conducting research is the basis for any club, league, or federation. Any sports organisation should be looking at a wide range of sports to see what the latest trends are being introduced. The real good examples are the ones who are doing well and succeeding without much funding. These are the ones you want to study because they can be the most creative. It’s easy to do good things when you have lots of money!”

BCL is using video a lot and doing it very well. How important is video?

“Video content is vital. If you have ten posts on social media channels, probably six or seven of them now must be video. You have to show small clips of moments that are of real value to the fans, as well as to providing behind-the-scenes and game day content. Sports organizations are becoming media and entertainment companies!”

One good example that pops in my mind is the Brøndby Indefra app.

“Yes, that is a neat example. It will be vital for them to ensure the app becomes the first choice platform for their fans. This will take time and investment to ensure the app is of benefit in terms of providing fantastic content, ticketing, merchandising and other push notification functionality.”

Is it important to combine all sources of content into one single platform?

“It depends on what content you are making and who your target audience is. Different people are on different platforms. Snapchat is a much younger platform than Facebook. Snapchat’s content is more playful than other platforms. The key is to drive your fans to your own platforms from the likes of social media or email marketing. Making sure the platforms provide the right content at the right time to the right person.”

Do you have other good examples of leagues having digital growth or working with fans both digitally and on-site?

“You have to look at the big American leagues: NBA, NFL and NHL. F1 and NASCAR are both doing well to set up their efforts on digital. Some football clubs are doing quite well in terms of fan engagement, such as Manchester City and AS Roma. I also love to see sports such as handball doing well in this space. I was invited to their Final Four (in Cologne) and the overall experience (digital and in stadium) was just fantastic.”

What was so special about the EHF Final Four?

“The overall branding around the stadium, the digital experience and the fan zone was of a high quality. In the stadium fans from different clubs were encouraged to shout and sing against each other. When the players came on, LED screens were brought to life with music. What’s important is not just to focus solely on digital, but rather a combination of digital and real-life engagement. It just felt right.” 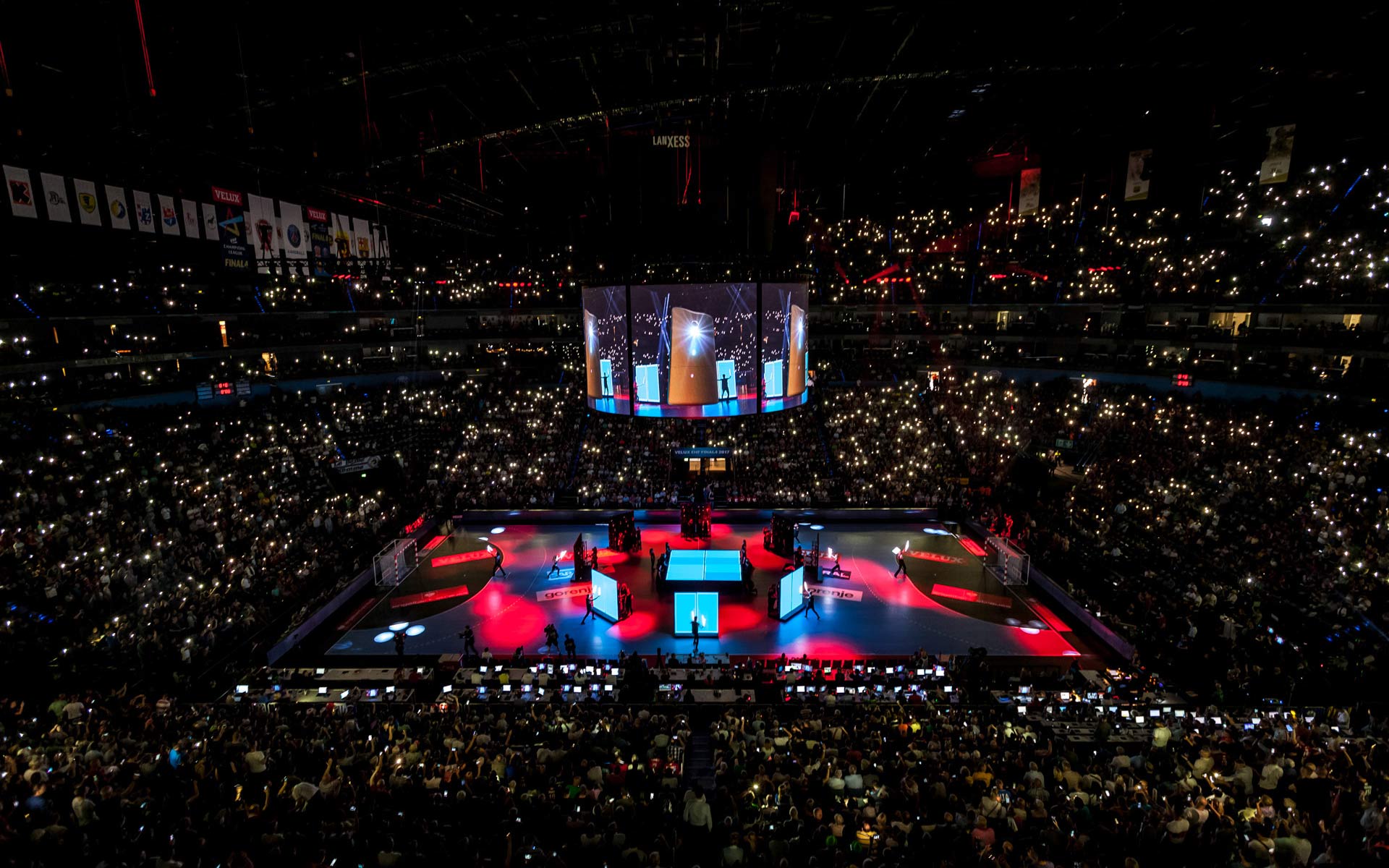 How do you feel about being engaged during the game in the stadium?

“I am there to watch the game, and I don’t want to be disturbed with mobile games. I paid money to watch a live game – not to watch my screen. However, engagement during half-time or after the game, that’s a different story.”

During half-time for clubs it’s probably about getting beer without standing in a queue, or having the ability to watch instant highlights on your phone?

“Yes, and why not have your food delivered to your seat? Let the fans order it before the game. Whenever the game goes into the half-time, you can check any content from the game and upload photographs to show that you’re at the game. Half-time quizzes on mobile are also great. Let the fans participate live: “Was it a penalty?”, “What are your thoughts?”. That’s very relevant when engaging fans both at the stadium and not at the venue.”

“I see many opportunities to involve fans from a commercial point of view. Rather than just selling merchandise, clubs should be doing fun and interactive games inside the stadium. What is important is to provide on-site fan engagement that is true to their brand and gives consideration to the fans expectations.”

What does the future hold?

“A few years ago I wrote a blog regarding fans having chip’s embedded into their body. The next twenty years will see the data revolution accelerate. Data will no longer be stored and transmitted via a mobile phone – rather a clip inside your body. For the full article click here.”

If you have questions about the discussed topics, feel free to contact us or Geoff Wilson.